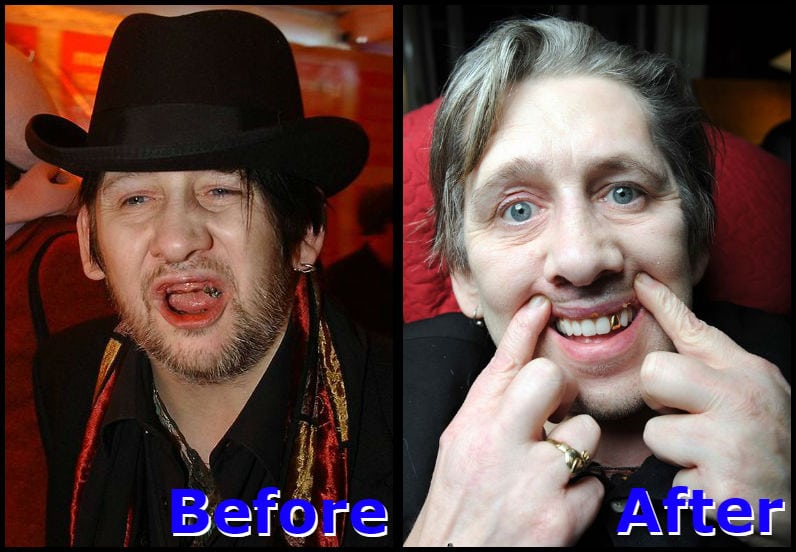 I’ve been reading a lot on this site about how the right direct composite veneers technique can transform a smile. Well, my friends and I were all sitting around at an Irish pub this past weekend and the topic of Shane MacGowan, lead singer for the Pogues came up. His teeth were destroyed for years because of drug use, but now they’re back to normal and he even has a gold tooth. I didn’t know dentists could apply gold in-office, but it looks like that’s what was done. I guess he had a documentary made about it, but I can’t find it anywhere to download. My buddies put me up to finding out what he had done- if it was a special direct composite veneers technique or something else.

Indeed. A few years ago, there was a documentary made about Shane MacGowan’s teeth. Fans of the Pogues had been watching his teeth deteriorate for years, to the point where even friend Johnny Depp spoke about them in an interview. MacGowan’s very public battle with cigarettes, heroin, LSD, and alcohol has been duly noted, though teeth in that state are most often attributed to methamphetamine use. Of course, MacGowan is also known for fighting, being involved in police skirmishes, and odd substance-influenced behaviors, like eating vinyl records, none of which have done his teeth any favors. That said, MacGowan has been open about his struggles, what brought him to where he was, and what getting clean and repairing his smile has been like.

Once teeth get to the stage where they’re severely decayed and broken, there isn’t a direct composite veneers technique that can save them. Veneers of any kind are cosmetic in nature. They simply cover the fronts of the teeth and work well to repair small chips, defects, and discolorations. Once there’s significant decay, full coverage in the form of a crown is necessary. In later stages, the tooth must be removed and replaced. Most dentists recommend dental implants in these cases, but dentures and bridges can also work when someone’s oral health or general health precludes having dental implants placed.

MacGowan originally had his few remaining teeth extracted and went with a denture. It’s unclear whether that’s because his health wouldn’t allow for dental implants or if it was his preference. However, the Pogues singer never took to his dentures. He had a few choice words about how they made him look, which aren’t fit for republishing in polite audiences. Years later, his long-term girlfriend went in and had a smile reconstruction done, which inspired MacGowan to do the same. This time around, he went with a comprehensive smile design, including dental implants. He worked with his dentist to create a smile that he felt suited him, choosing a darker shade to make them look more natural and including a gold crown atop one dental implant because he thought it made him look “sexy.” The crowns were likely made in a dental implant lab versus in the office, as is standard protocol. Hope this helps clear things up.

This blog is sponsored by Uveneer. For more information on using the Uveneer system’s direct composite veneers technique for dentists, visit Uveneer.com.